Christmas – A Yearly Instructive Event for the World 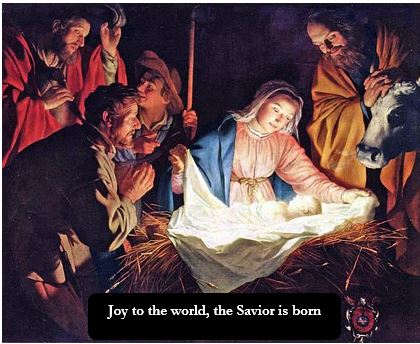 Christmas is a commemoration of the birth of our Lord Jesus Christ. No one has the accurate time and date when Jesus was born. I am not sure if there was any calendar in place at that time. The current calendars all over the world are around His person and life, dating either before Christ or after His death. We are thankful for those God used to initiate the celebration of Christmas, notwithstanding the possibility of the date coinciding with a pagan celebration. It does not make any difference so long as we observe this day as unto the Lord. Any other story behind December twenty-five cannot change the significance of the birth of Jesus Christ. We should therefore not harbor any ill-feelings or judge ourselves for celebrating Christmas. Paul advised on what should be the focus of our actions: “One-person esteems one day as better than another, while another esteems all days alike. Each one should be fully convinced in his own mind. The one, who observes the day, observes it in honor of the Lord. The one who eats, eats in honor of the Lord, since he gives thanks to God, while the one who abstains, abstains in honor of the Lord and gives thanks to God.  For none of us lives to himself, and none of us dies to himself. For if we live, we live to the Lord, and if we die, we die to the Lord. So then, whether we live or whether we die, we are the Lord's. For to this end Christ died and lived again, that he might be Lord both of the dead and of the living (Romans 14:5-9). What matters is not the day we celebrate but who will celebrate.

The celebration of Christmas is not a Biblical doctrine but a custom that catches the attention of the world. Whatever Satan sometimes meant for bad, the Lord turns to good for His glory. Even if Christmas was initiated by Satan, Satan must have made a blunder because Christmas depicts to the world the reality of Christ, His birth, His resurrection and His second coming which people can no longer deny or ignore. Jesus Christ remains an issue in the world of sin and a hope for those who look forward for eternity after this life. Also, Christmas is unique for everyone including those who hate the name of Jesus Christ. The uniqueness of Christmas includes the fact that the world celebrates His coming to the world a week preceding another calendar year. It is usually a time to take stock of the events of the passing year and to know how we have fared in the scheme of things, whether well or poorly. This explains why not a few people make New Year resolutions. The resolutions are based on perceived failures in the passing year, measured intuitively, by the life and teaching of the Lord of Christmas, Jesus Christ. The life and teachings of Christ is the yardstick through which we measure our failures and successes over the years. He is the big mirror through which the world sees itself. And very often, the mirror shows humanity in its depravity. I wonder how else the world systems would implement effective stocktaking without the coming of Christ, and the yearly remembrance of His coming, going by our arrogance in political, social, and economic world. We too often get intoxicated with power and self- pride and forget that we do not exist in our own power. Nebuchadnezzar, a king in Babylon learned his bitter lesson and repented. But Herold, a king in Israel was not as lucky in his own arrogance; he was struck to death and eaten by worms instantly.

It is also a time for the wise to remember that another year is passing by and that age does not remain the same. It is time to remember that we are not getting younger. The Psalmist sums up the human scenario thus: “Lord, You have set our iniquities before You, our secret sins in the light of Your countenance. For all our days have passed away in Your wrath; we finish our years like a sigh. The days of our lives are seventy years; and if by reason of strength they are eighty years, yet their boast is only labor and sorrow; for it is soon cut off, and we fly away. Who knows the power of Your anger? For as the fear of You, so is Your wrath. So, teach us to number our days that we may gain a heart of wisdom. (Psalm 90:8-12). The celebration of Christmas thus has an unwritten intention, to help us to pass our shortcomings and take the grace that is given to us to make amends before the final curtain to the end of the world is drawn. Christmas 2018 is specifically important because the world is really turning upside down. The signs are ominous: The European nations are restless. Great Britain is at the crossroad on what to do with Brexit. The impact of Brexit on the economy of the United Kingdom is not good. Besides, Islamic jihad has taken a big portion of the land putting much pressure on British governance. The French government is under pressure on the citizens protests against some of the policies of government. In Russia, North Korea, China, and other Eastern and Asian world, there is an uneasy calm everywhere. The situation in the Middle East (Iran, Saudi Arabia and Syria, Palestinian vs Israel) is not showing any signs of improvement, we cannot see much to cheer about.

In addition, the United States of America which has often been the center for stabilization in the world has been engulfed with internal political issues of the two main parties, Republicans and Democrats. There is currently open disagreement, resulting in personal animosity between the political gladiators on both sides. With the Democrats controlling the house, and the Republicans in the white house and senate, no one expects a harmonious relationship in governance and this will have ripple effects on the events in the world. In Africa, there are elections coming up in one or more of the most strategic nations, Nigeria included; and the struggle does not purport to be an easy one. It appears every spot of the world is laden with mines and explosives which threatens to engulf the world. But here comes the message of Christmas to the Children of God and lovers of the gospel of Christ. Isaiah, an old prophet laid out clearly the impact which the coming of Christ will have in the midst of these impending struggles in the world.

“Behold! My Servant whom I uphold, my Elect One in whom My soul delights! I have put My Spirit upon Him; He will bring forth justice to the Gentiles. He will not cry out, nor raise His voice, nor cause His voice to be heard in the street. A bruised reed He will not break, and smoking flax He will not quench; He will bring forth justice for truth. He will not fail nor be discouraged, till He has established justice in the earth; and the coastlands shall wait for His law.” Thus says God the Lord, who created the heavens and stretched them out, who spread forth the earth and that which comes from it, who gives breath to the people on it, and spirit to those who walk on it: “I, the Lord, have called You in righteousness, and will hold Your hand; I will keep You and give You as a covenant to the people, as a light to the Gentiles, to open blind eyes, to bring out prisoners from the prison, those who sit in darkness from the prison house. I am the Lord, that is My name; and My glory I will not give to another, nor My praise to carved images. (Isaiah 42:18)

We should reflect over the situations in the world and think of how we are contributing positively or otherwise to its resolutions. In our capacities as current leaders, past leaders, opinion molders, we must reflect with sober minds like David, to be able to appreciate that arrogance and pride do not make sense because God and not us has the final say. Our pride notwithstanding, God is on the side of the common man and He will deliver them speedily in the coming year. Isaiah concluded this way: The Lord is well pleased for His righteousness’ sake; He will exalt the law and make it honorable. But this is a people robbed and plundered; all of them are snared in holes, and they are hidden in prison houses; they are for prey, and no one delivers; for plunder, and no one says, “Restore!”. And the Lord promised through the prophet that He will help: “I have held My peace a long time, I have been still and restrained Myself. Now I will cry like a woman in labor, I will pant and gasp at once.  I will lay waste the mountains and hills, and dry up all their vegetation; I will make the rivers coastlands, And I will dry up the pools. I will bring the blind by a way they did not know; I will lead them in paths they have not known. I will make darkness light before them, and crooked places straight. These things I will do for them, and not forsake them.

Based on this, I will like to encourage all those who trust in the Lord to remain firm in their faith. The perilous days are here but tough time does not last. When the time becomes tough, only the tough people will keep going because it will only help to toughen their faith in the Lord. Life was tough before the first coming of Jesus Christ in human form in Bethlehem. In the midst of the uncertainties, there was a Jewish man who stood firm waiting for the coming of the Messiah. The Bible records: “And when eight days were completed for the circumcision of the Child, His name was called Jesus, the name given by the angel before He was conceived in the womb. And behold, there was a man in Jerusalem whose name was Simeon, and this man was just and devout, waiting for the Consolation of Israel, and the Holy Spirit was upon him. And it had been revealed to him by the Holy Spirit that he would not see death before he had seen the Lord’s Christ. So, he came by the Spirit into the temple. And when the parents brought in the Child Jesus, to do for Him according to the custom of the law, he took Him up in his arms and blessed God and said: “Lord, now You are letting Your servant depart in peace, according to Your word; For my eyes have seen Your salvation which You have prepared before the face of all peoples, a light to bring revelation to the Gentiles, and the glory of Your people Israel.” (Luke2:21-32). Grace to you and peace from God our Father and His Son Jesus Christ a you ponder over these.

Michael Jolayemi is an author and Bible teacher. He has written two books on social issues: “Saving America: The war we can’t ignore”; and “Sheltered through the storm: the travails and ultimate triumph of the Church.” Check his blogs and look out for his next book.

While men slept, the enemy came Part 3 – A call for Prayers
The Gift of Resurrection- A Matter of Personal Choice.